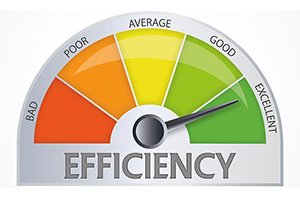 Heating, ventilation and air conditioning are some of the largest consumers of energy in modern households. In fact, some estimations place the average home’s use of energy for HVAC at around. Fortunately, there are a variety of steps that can be taken to reduce this drastic figure, not only promoting a healthier environment, but saving a pretty penny on electric bills as well. If you’re curious about how this may be accomplished, read on for a few ideas.

The most obvious means of increasing HVAC efficiency is by using an energy-efficient system. Newer heaters and air conditioners are not only constructed of more modern materials that improve insulation and reduce electric use, but also feature computerized systems for enhanced temperature control. As such, not only do these systems use the energy they are given more efficiently, but they also allow an unprecedented level of control over the times of day when heating or cooling is used.

Upgrading an inefficient system to a newer, more energy-efficient one is a step that many will not take without incentive. While more efficient systems will save money over longer terms due to lower bills, this is often not enough cause to justify such an expensive upgrade. As such, many state and federal tax credits are available to further encourage such a move.

Information on such credits can vary widely based on where you are located. An online search is the best place to start, with lots of information being made available at the Energy Star website ( http://www.energystar.gov.) Your HVAC contractor is also likely a great source of information, as knowledge of the various tax credits available in your region is a great way to encourage purchases that might otherwise not be made.

Another less obvious source of increased energy efficient heating and cooling is solar power, or more specifically, passive solar energy. With the correct architectural and other considerations, the rays of the sun can be harnessed not only to heat a structure, but to cool one as well. Such use can dramatically slash your need for traditional, electronic systems.

Solar energy’s ability to heat is its most obvious use. Proper placement of windows can admit rays which have a dramatic effect on internal temperatures. In instances where windows are not available, glass tubes can be used to channel rays into other enclosed spaces, offering the benefits of solar heating in rooms without an abundance of natural light.

Solar energy can be used to cool as well. By heating air in certain locations, the sun’s rays can cause the air to rise, displacing it with cooler air. As such, a location can be cooled by the constant replacement of the heated air by cooler, moving wind.

Many other solar techniques are available for heating and cooling. Using solar energy in this way is often more efficient than is converting it into electrical power, a process in which some energy is lost. As such, passive techniques can be used in areas where traditional solar energy use is otherwise impractical.